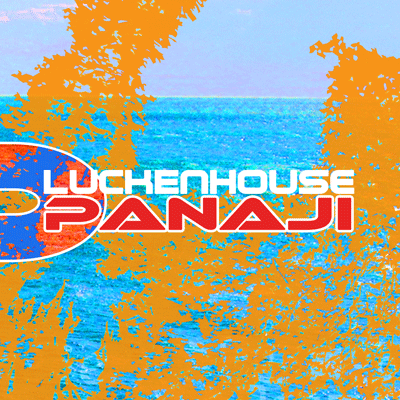 Download and listen to all single tracks on this webpage here. You can also find some of the tracks on the following websites:

The album is dedicated to Richard H Kirk - a true pioneer of electronic music. And several tracks on Panaji indeed show influences of Kirk, such as atmospheric noises and loops. However, LuckEnHouse produces his very own style of electronica based on magical sound effects, repetitive patterns, and strong melodies.

As an add-on to the music the album comes with a single artwork for each track. It can be downloaded for free from the website www.tinopener.de.

cover and informationen for all tracks

Mangalore
mp3 192kbps 9.2 MB 6:43 cover/infos
Trip hop elements, mechanical electronic, light sound sculptures, all based on the strong beat of the city - this track tells the story of a day in Mangalore. It starts with the first sun beams in the morning, that awakes the busyness, sees the industrial activity in the port of Mangalore and ends in the night outside the city under the stars.

Chennai
mp3 192kbps 8.3 MB 6:02 cover/infos
This straight eletronic track tells the story of a drive along the coast-line to the busy port city Chennai where urban activity meets the endless horizon of the ocean.

Pune
mp3 192kbps 11.1 MB 8:07 cover/infos
This fast techno-track is about an old man who tells many stories of the past, when people fought in Pune for independency and social reforms.

Bhubaneswar
mp3 192kbps 7.2 MB 5:12 cover/infos
This trance-track about the temples of Bhubaneswar starts with meditative percussion, then adds a driving bass line and beat, and combines it with transcendental sound sculptures.

Visakhapatnam
mp3 192kbps 13.6 MB 9:58 cover/infos
A track like a goa party - a never ending driving rhythm, different layers of percussion and moving synth sounds tell the story of the ocean and beaches in Visakhapatnam.